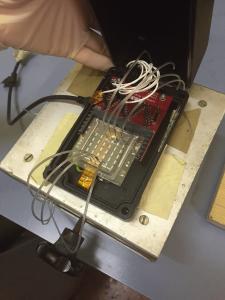 PCR-on-chip: Lab-on-Chip are miniaturized systems able to perform biomolecular analysis in shorter time and with lower reagent con- sumption than a standard laboratory. Their miniaturization interferes with the multiple functions that the biochemical procedures require. In order to address this issue, our paper presents, for the first time, the integration on a single glass substrate of different thin film technologies in order to develop a multifunctional platform suitable for on-chip thermal treatments and on-chip detection of biomolecules. The proposed System on-Glass hosts thin metal films acting as heating sources; hydrogenated amorphous silicon diodes acting both as temperature sensors to monitor the temperature distribu- tion and photosensors for the on-chip detection and a ground plane ensuring that the heater operation does not affect the photodiode currents.

The device has been designed, fabricated and tested for the implementation of DNA amplification through the Polymerase Chain Reaction (PCR) with thermal cycling among three different temperatures on a single site. The glass has been connected to an electronic system that drives the heaters and controls the temperature and light sensors. It has been optically and thermally coupled with another glass hosting a microfluidic network made in polydimethylsiloxane that in- cludes thermally actuated microvalves and a PCR process chamber. The successful DNA amplification has been verified off-chip by using a standard fluorometer.

Real Time PCR is under development.

SELEX on Chip: Recently, the use of aptamers instead of antibodies, as recognition and detection molecules, has been shown advantageous. Aptamers are artificial single-stranded DNA or RNA sequences (more recently, peptides) that fold into secondary and tertiary structures making them bind to certain targets with extremely high specificity.

Aptamers are selected in vitro via a combinatorial chemistry technique known as SELEX (systematic evolution of ligands by exponential enrichment) overtaking the use of cell lines and animals as starting stages for the production of antibodies, and permitting their production in large quantity with high purity and lower ingredient costs.

The SELEX process starts with the generation of a library with a great number of random nucleotide sequences (10^13-10^16), which are incubated with the desired target molecule under conditions suitable for binding. Next, the unbound single-stranded DNA (ssDNA) are partitioned from those bound specifically to the target molecule, then eluted by the target molecules, and amplified by polymerase chain reaction (PCR). This procedure is reiterated for multiple rounds (typically 8-15) until the bound sequences are enriched. SELEX process requires the use of bulky equipment such as shaker and PCR machines and the use of large amount of reagents and samples.

Recently, literature shows an increased interest in developing miniaturized platforms, which combine microfluidic and micro-electromechanical systems (MEMS) technologies for the miniaturization and automation of the SELEX process with implications in terms of reduction of time and improved efficiency of the whole process.

Lab-on-Chip for Detection of Mycotoxins (OTA):

A multichannel glass-PDMS microfluidic chip functionalized with a novel aptasensor has been developed for the detection of Ochratoxin A (OTA). The aptasensor is built on a glass substrate covered with a poly(2- hydroxyethtyl methacrylate) brush layer, which is subsequently functionalized with an aptamer having high affinity towards OTA. The assay relies on an aptamer-linked immobilized sorbent assay (ALISA) using two different OTA aptamers, which, in presence of OTA, assemble to form a sandwich-like struc- ture generating a chemiluminescent signal. The chip is combined with an array of amorphous silicon photosensors that transduce the chemiluminescent signal into an electrical signal that can be processed to detect and quantify the OTA in the sample. The successful detection of OTA has been demonstrated in standard solutions and in beer samples spiked with OTA. The results shows that the values measured for OTA, applying the ALISA assay, are comparable to those measured by the reference methods. The sensitiv- ity of the proposed analytical method is 0.32 pA L/mg, while the LOD and the LOQ are 0.82 and 2.5 mg/L, respectively. Taking into account both the LOD of the ALISA and the method applied for OTA extraction from beer samples, we extrapolated that 1.1 g of beer sample is sufficient to detect OTA contamination under the regulatory limits.

The use of this device for analyzing real samples is under development.

Enzymatic Chip for Metabolic Disorders:  In this project we show the functionalization of the interior of microfluidic glass chips with poly(2-hydroxyethyl methacrylate) polymer brushes as anchors for co-immobilization of the enzymes glucose-oxidase and horseradish peroxidase. The formation of the brush layer and subsequent immobilization of these enzymes have been characterized on flat surfaces by atomic force microscopy and Fourier transform infrared spectroscopy, and studied inside glass chips by field emission scanning microscopy. Enzyme-functionalized glass chips have been applied for performing a multi-enzymatic cascade reaction for the fast (20 s) determination of glucose in human blood samples and the result is in excellent agreement with values obtained from the conventional hospital laboratory. The limit of detection of this bi-enzymatic method is 60 mM. With the advantages of high selectivity and reproducibility, this functionalization method can be used for improving the efficiency of glucose sensors.

This device can be applied to test also cholesterol and triglyceride using a chemiluminescent reaction. The emitted light can be detect by the array of photosensors.

Celiac disease (CD) is a chronic inflammatory disease of the small intestine that affects genetically susceptible individuals. This disease is unique in that the critical etiologic factor has been identified as the ingestion of gluten found in grains of wheat, barley, rye and triticale. Upon ingestions of those proteins, the symptoms showed by patients affected by CD can be severe, thus the diagnosis and treatment must be fast. The diagnostic procedure is performed through serological tests and histological examination of at least one biopsy. In the recent years, the area of serological testing for CD has developed greatly, since it is less invasive than biopsy3. Among all serological tests, recently, a lot of attention has been given to the analysis of antibodies against the deamidated gliadin peptides (GPs) due to their promising performance as compared to the most commonly used antigliadin antibodies (AGA), endomysial antibodies (EMA) and tissue transglutaminase antibodies (tTG). Recent studies have demonstrated that the detection of antibodies for GPs can be applied for the diagnosis of celiac disease and for monitoring the adherence of CD patients to gluten free diet (GFD).

The determination of antibodies is generally based on enzyme linked immunosorbent assay (ELISA) based screening tests.To improve the throughput of these processes, robotic systems can be used for fluid handling, but this solution is only available to wealthy laboratories and requires significant maintenance efforts and a large laboratory footprint. Therefore, there is a demand to develop an automated and miniaturized platform for immunoassay.

In this project, we aim to develop a lab-on-chip system, which combines a glass-polydimethilsiloxane microfluidic network and an array of amorphous silicon photosensors for the diagnosis and follow-up of Celiac disease. The microfluidic chip implements an on-chip enzyme-linked immunosorbent assay (ELISA), relying on a sandwich immunoassay between antibodies against gliadin peptides (GPs) and a secondary antibody marked with horseradish peroxidase (Ig-HRP). This enzyme catalyzes a chemiluminescent reaction, whose light intensity is detected by the amorphous silicon photosensors which are positioned underneath the microfluidic ELISA. Tests are performed on blood samples of celiac shyndrome patients and compared with healthy populatation.